More stuff.  It takes awhile to accumulate enough films to justify the trip down to get them processed; hence the lack of new posts. However, I just got 5 -- count 'em -- 5 -- rolls back.  Here's a preview.  As always, click on the picture to see a bigger version.

First off:  a  30-second time exposure from the 30th floor of the Minto Hotel in Ottawa: We're looking north-west, towards the Ottawa River. The long streak of light in the middle,  foreground and background, is Albert St., and the S-shaped curve of street lights on the right is the Ottawa River Parkway.
Next, a snowy street scene in Toronto.  We had lots of the white stuff this winter, and not too much, just enough. 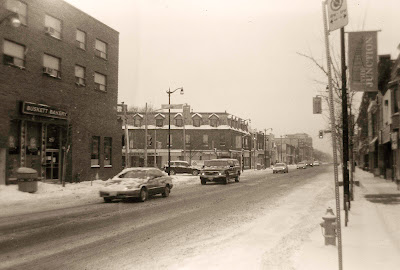 The meniscus lens is a funny thing; snappy and sharp in the centre, soft and a bit distored at the periphery.  But contrast is good.  The tone is from the non-neutral colour of the acetate base of the cheap Chinese film.  At least, this is how the scanner is rendering it.  Fuji Neopan, whose base is dead-neutral, looks more blue-black.

Here are some kids doing what kids are supposed to do when it snows in a park with a hill: 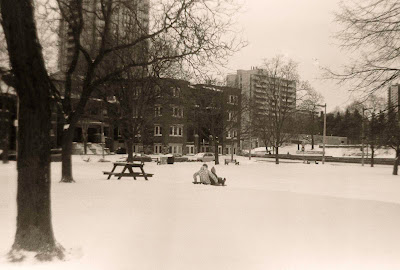 I note simply this: they were not just the only kids in the park, they are the only kids on a toboggan I saw the whole winter.  Good thing I had my 70 year old camera to record the proof.  Future generations won't believe me! 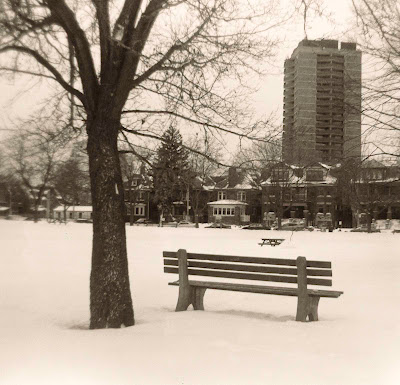 Another part of the same park: the jungle gym, partly buried.

What would winter in Toronto be without drivers struggling to find legal parking on snow-filled side streets? 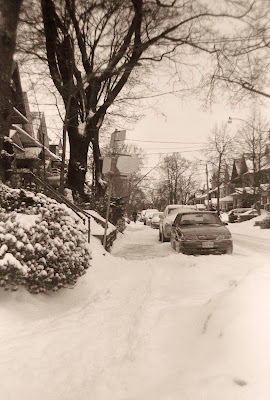 One more word about the Shanghai GP3 film:  the actual emulsion has many small imperfections.  They don't show up much on such a big negative (6x9 cm) but would be the size of boulders on a 35mm neg.  Don't use this stuff for anything serious.  It works great for the Vigilant Junior, because the camera's technical limitations dictate the overall quality much more than the film.
Posted by John Holland at 6:42 PM